The club was conceived in 2005 with a few local woodturners wishing to promote the craft of woodturning in the local area, founding members included, Sandy Henderson (SY), Bob Macabe, Mark Sutton, Brian Edmanson & Bill Munro. The club formally started in the summer of 2006. HWC was granted affiliation to the AWGB on the 10th April 2006 and a certificate issued to Sandy Henderson one of the founding members. At this stage the use of Charleston Academy was still under negotiation and the club’s first meeting had yet to take place. Charleston Academy did allow HWC to use some of their facilities under a let agreement, this continued until 2010 when HWC secured the tenancy of the basement of the village hall in Munlochy for their exclusive use.

28th of April 2010 was to be an important date in our club history.

That day at 1845 hours, our first official club meeting was held in the club’s new premises at Munlochy Village Hall in Munlochy.

It all started on the beginning of January 2010 when an agreement was made between our club and the Munlochy Hall Management committee. The basement on the rear of the building has been rented to our club.

At first, piles of old furnishings, left over by the previous “lodger”, had to be removed: 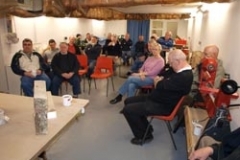 Then the place was tidied up, all other rubbish removed and under the watchful eye of Bill Munro hard work began:

It seems to be not that long time ago when we held our first meeting in Munlochy, but it is now over 7 years since that day. Most important achievement to date is the new equipment bought for the club:
Two Record Power CL 4 lathes with variable speed (one with bowl turning attachment), and a Robert Sorby Pro Edge sharpening system and three Record Power dust extractors. 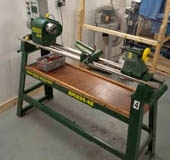 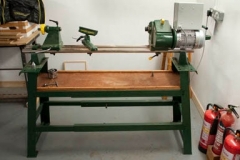 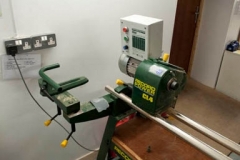 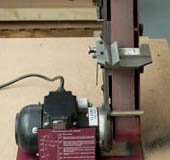 All coming from MacGregor Industrial Supplies Ltd and funded by:
Voluntary Arts Scotland’s Make a Splash grant scheme – part of
People Making Waves coordinated by Volunteer Development Scotland.
People Making Waves is part of the Scottish Project, which will create a cultural legacy from the 2012 Olympic Games in Scotland.
It is supported by Legacy Trust UK and by the National Lottery through Creative Scotland.

Thanks to all this new equipment and hard work of some club members who were sharing their knowledge, we have been able to set up a training program. For all those members just starting with woodturning or those willing to get some more experience there are dedicated monthly Saturday and Thursday sessions. In addition help sessions were run alongside the above and attended by members.