Our Platters virtual meeting took place this week on Thursday 14th May 2020, it was being organised by Peter Lawrence but had to be made into a virtual meeting due to the lockdown. We did get some response from the members, not as much as I would have liked, 9 of our 65 members submitted pictures of their work and for that we are very grateful, however that meant that 56 did not, and that also included 7 of the 12 committee members. It does appear that since we started the virtual meetings that there are a handful of members who are more than willing to take part with the rest taking little interest, this is most disappointing because we are trying to keep the interest in the club alive and that will only happen if you all participate. I do hope that at the next virtual meeting in 2 weeks time there will be a better response, we were also asking for you to put any pictures in of anything you were doing outwith the virtual meetings in for publication on our web site and facebook page, this too seems to have come to a complete halt.

There are a total of 30 pictures submitted by our members along with some text, I will put this into 2 sections, the text being the first section and the pictures in a second as a picture gallery. Here are the text entries.

Pictures 1 to 3 are from Alan Ross.

Pictures 4 & 5 are from Bob Chisholm.

A Sycamore Platter measuring 300 mm x 35 mm, it was sanded to 400 grit then sealed with sanding sealer, re-sanded with 400grit and a coat of Melamine applied, it was then buffed to a soft sheen,

Good evening, Geoff. I attach photos of my recent work. Unfortunately my oak platter had a few breakouts hence the reason it became more of a bob-bon dish instead. I took heart from Alec’s recent showing to finish off my table lamp using two lignum vitae bowls, one cut in half, and the other mounted on top . I drilled a separate piece of odd wood I had tuned as I originally planned to use a metal pipe to connect the lamp holder but couldn’t  get a fitting of the requisite size. The other half of the bowl I turned to make a small trinket dish as shown, just like Alec’s, though not nearly so skillfully nor tastefully made. I turned small pieces of contrasting wood to glue in the bases to flatten them and hide the turning recesses. I applied sanding sealer, melamine lacquer then chestnut wax polish to all the items.

Here are 3 platters I have made.

The 1st is 170mm dia, it is made from Ash with Mahogany insert, the only problem I encountered was getting the mahogany inserts to bend without cracking, also cutting the blank, this has to be done (very accurately) when the blank is still square so that it can be clamped when the glue is drying It is finished off with food safe finish.

The 2nd is 200mm dia made from Ash. The blank is first turned then sprayed with Ebonising Lacquer (cheap mat black spray paint from Aldi) then the blank is rotated at 2000rpm on the lathe when dry and “Butt It” paint flicked onto the blank whilst rotating. The platter is then turned where required to remove unwanted paint and finished off.

The third is only 150mm dia and my first attempt at using Pabeo Prisme paint and as can be seen I need lot’s more practice.

Pictures 14 to 18 are from Errol Levings.

Two very plain platters from the same piece of Tibetan spruce- still fairly wet with lots of resin. Very soft, some ripple and short grain so kept thickness up. Needed very sharp tools to cut clean. Had hoped the spruce would have been easier to use – some lovely ripple near the bole. These two platters are 120mm by 15mm. Will finish with OSMO foodsafe oil – have only had one coat so far.

The platter was made from an unpromising thin piece of oak. The wood was thoroughly dry and had a waxed circumference. There was an obvious knot and a section that looked like it might fly off! I used very short screws to attach it to my face plate and used my revolving centre as support until I became convinced it wouldn’t all Frisbee off my lathe. I turned the base including the mortise to suit my chuck. I decided that because of the thin section I would keep the mortise after I had finished so took the opportunity to decorate it with a few grooves. These grooves would probably impress my friends but wouldn’t impress many Woodturners.

It took at least 6 applications of superglue and wood dust at various times to stabilise the knots and cracks.

The top with its very shallow dish looked too plain so I used two small grooves to highlight the rim/dish boundary.

I like the result, the oak has an impressive set of grain and medullary rays. Its finished with sanding seal, sanded to 400 grit, melamine and a wax. The platter is 220 x 15mm. Quite a thin turning for me.

Pictures 21 to 23 are from Gordon Leitch.

One is made of oak

The other is made of elm

Picture 24 is from Nick Simpson.

It is a composition of two adjacent slices through the grafted crown of a flowering cherry.

The frame is just that. It gives the sense of a mirror and, in fact, the judge in the Borders Woodworkers Open competition asked the Borders club chairman why someone would bring a mirror to a competition for woodturnings.

The platters are 7” diameter and textured followed by pyrography.

I have made 3 new platters this week, also shown a couple of smaller platters I had made in the past, all of them have something different to offer.

1, This is an Elm platter it measured 305 mm in diameter by about 40 mm deep, I brought the bowl through the rim by creating 2 small beads on top of the rim.

2, This is an Olive Ash platter it measured 330 mm in diameter by about 40 mm deep, I decorated the rim  using a laser.

3,  Another Elm platter, it measured 305 mm in diameter by about 50 mm deep, I cut some Celtic design inserts for the rim and set them in by drilling a series of shallow recesses to accommodate the inserts, I then used some Milliput to fill the recesses before completing the turning, the Milliput was allowed to harden over night.

4, A smaller Ash platter, with a decorated rim. I used some Pebeo paints for this, the  base coat was Black Vitrail and the Blue was Pebeo Moon, both were allowed to dry for several days before finishing the turning.

5,  Another Ash shallow platter, measuring 250 mm by 30 mm again with a decorated rim, this time the paint is Pebeo Prisme in 3 different colours, these paints are oil based and can be applied at the same time then allowed to dry over several days, in the process they react to each other and produce the formations you see on the rim.

6, I have included a picture of my Laser in operation, it’s a LOBO 6040 CNC machine, it can do engraving or cutting with the use of a suitable computer programme.

This is a late entry from John Ruickbie, it’s very relevant to what’s going on at present so I have given it front of house prominence.

This is what John had to say about his entry,

This is a tribute to the work being done combating the virus it is more a plaque than a platter. The centre is the virus which I have given a black centre.  Each group is a spear of sycamore piercing the virus. The overall diameter is 290mm and the stand is elm. 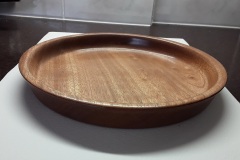 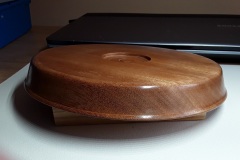 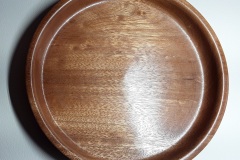 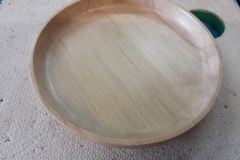 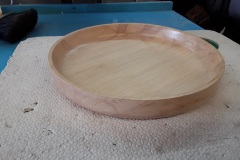 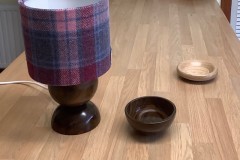 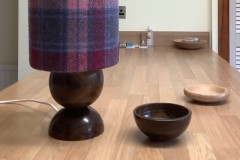 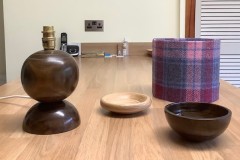 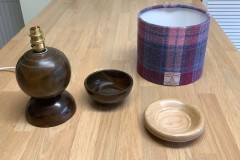 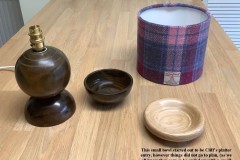 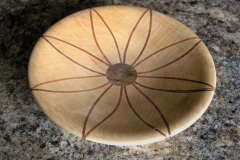 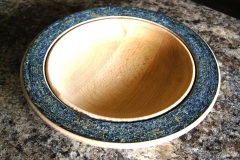 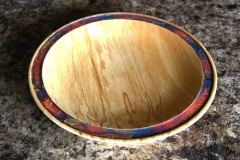 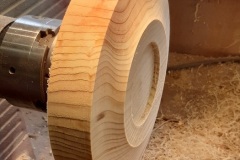 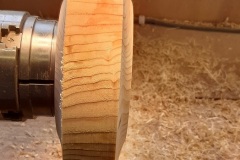 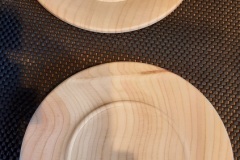 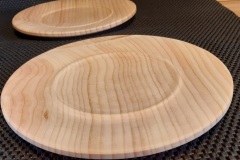 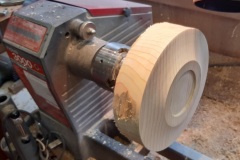 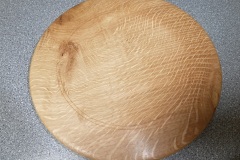 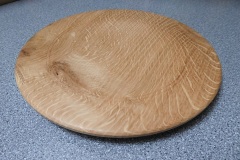 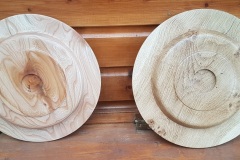 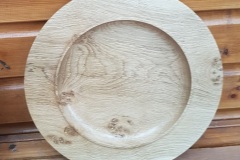 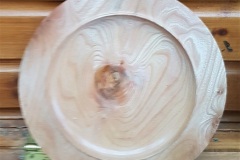 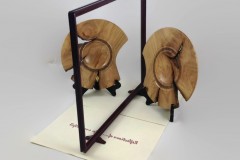 To get a full sized picture of any in the gallery just click the picture, we hope you find the pictures interesting and encouraging, and perhaps on the next virtual meeting you too could have your work posted here. We look forward to seeing what you can do.

Do remember the clubhouse remains closed.